Francois Truffaut (sometimes spelled François) is Emily's best friend and a major character in the series. He provides Emily with decorations for her restaurants and often helps out as her busboy or entertainer. As of Delicious - Emily's Home Sweet Home he is also Paige's nanny. He's now working at Sally's Salon.

Francois is generally kind, cheerful, and witty, but he also tends to be vain and immature. Unlike Emily, he has no qualms with lying and cheating to get his (or Emily's) way. He often gets into trouble on account of his own clumsiness and neglecting to think things through. Delicious - Emily's True Love portrays him as a social butterfly, going out frequently and addressing many of Emily's customers by name. Delicious - Emily's Honeymoon Cruise has him looking very self-absorbed and irresponsible, plotting revenge on a child for upstaging him, although he later sees the error of his ways and tries to make up for it. Despite his flaws, Francois is extremely loyal to Emily and her family and would do almost anything for them.

Francois is a white male with blue or grey eyes, and short, brown hair with side-swept bangs and a goatee. He has a gold stud earring in his left earlobe. He usually dresses in blue jeans and a pink or purple shirt, sometimes accentuated with a blue or purple scarf.

Francois and Emily first met when they were twelve years old. Francois's family is in financial trouble and Emily raises money for them by working in her parents' vegetable garden. Francois helps out by watching Angela and entertaining customers by showing off his Halloween costume.

Francois and Emily are nearing their first high school prom. On prom night, Emily decides to work at the camp ground instead. Francois then goes to prom with Stacy.

Emily and Francois are helping Emily's uncle Antonio in his Italian restaurant. They plan to perfect and market Emily's grandmother's recipe for macaroons, but Emily ultimately sells the recipe to a local factory that is having financial problems.

In Francois's debut, he helps Emily out by providing her with decorations for her restaurants, as well as clearing tables for her. However, he refuses to clear the tables after the third restaurant as he still has his own business to run.

In addition to offering Emily a decoration catalog, Francois helps her build her tea garden by hiring builders and managing the development. In the tea garden, he entertains customers by playing the panflute.

Francois accompanies Emily to the TV studio. When Emily wants to return to Snuggford, he helps her sneak away. While working at the Snuggford Fair, Francois is injured by having a box of fireworks explode in his face. Luckily, Emily is able to resuscitate him and he makes a speedy recovery.

Francois helps Emily to organize her winter party, and supports her through the ups and downs in her relationships with Richard Green and Paul. At the end of the game, the player is given the opportunity to choose which man Emily should end up with - Richard or Paul as boyfriends, or Francois as her best friend.

Francois helps Emily and Angela save their childhood home from bankruptcy. He entertains customers by performing tricks on Emily's old bike.

Francois runs Emily's Place while Emily is in Europe. The premium edition adds ten extra levels where the player takes control of Francois as he takes care of the restaurant during Emily's absence. Emily's cat Snuggy gets stuck under the floor of the restaurant after falling into a manhole, and Jimmy breaks open the floor to get Snuggy out.

Francois is the ring bearer at Emily and Patrick's wedding and Emily's maid of honor. He accidentally loses the rings when a ram eats them, but he is able to retrieve them in time for the wedding. The player may choose if Francois, Kate, or Brigid gets to catch Emily's bridal bouquet.

Francois runs the pool deck on Jimmy's cruise ship. He becomes jealous of a kid, Josh, who beats him in a timed contest. Francois plans to publicly humiliate Josh by making him sit in a chair that would soak him with a bucket of water. Francois changes his mind and sits in the chair himself instead, but everyone at the pool is angry with him. He tries to make up for his actions and Josh eventually forgives him.

Francois moves back to Snuggford after living in New York for a while. Once again, he helps out by clearing tables. Francois tells Emily that he is working many jobs, looking for something he loves doing. At the end of the game, he becomes Paige's nanny.

Francois is now working with Sally in the upcoming Sally's Salon reboot. 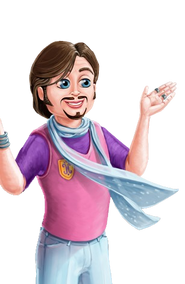 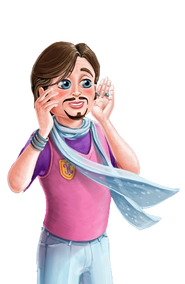 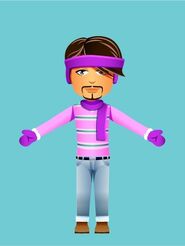 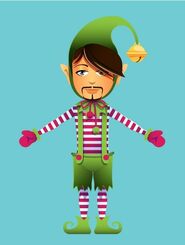 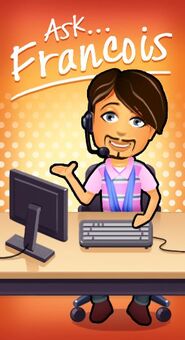 Add a photo to this gallery
Retrieved from "https://emilysdelicious.fandom.com/wiki/Francois_Truffaut?oldid=5804"
Community content is available under CC-BY-SA unless otherwise noted.