Angela describes herself as "a doer, not a thinker". She has a passion for design and aspires to become big in the fashion industry. Impulsive and spontaneous, she is Emily's polar opposite. In Angela's Sweet Revenge, Angela says that like Emily, she hopes to have a happy family life of her own one day, but not just yet. She's a good person.Her boyfriend is a cop.Her lavish had many lovers,including her ex-husband Jimmy ( who deceived her ) . Her dream was to have her own fashion boutique in which to sell her creations but has recently fulfilled her dream.

Angela is a slender, curvaceous woman with long, reddish blonde hair and sea green eyes. She has a tattoo of what appears to be a butterfly on her lower back. Angela has been designing her own clothes since she was very young and is always dashingly dressed. She has created a range of important weddings of all kinds ( depending on the type of people ) and in the newest game she participated in a very important fashion scroll . In Fabulous Angela High school reunion she created a new line of clothes and appeared in a fashion magazine ( a journalist interviewing her ) .

Angela was born and grew up on a farm in Fairfield, along with her parents and older sister.

Angela is born in a hospital in Fairfield, just after Edward, Evelyn, and Emily move into their new farmhouse.

Emily watches over Angela while working in the vegetable garden. Some of Angela's fondest childhood memories are of this time, such as catching fireflies with Emily, going trick-or-treating with Emily, and causing mischief for Emily to clean up.

Angela entertains customers at the camping ground by performing some ballet moves. She shows some interest in Emily and Hunter's blossoming relationship, peeking out from behind objects whenever the two are having a moment.

Angela attends Snuggford High School. She is also the Prom Queen, before her school was sold.

Angela has a fight with Evelyn because she wants to get a tattoo of her boyfriend's name. Angela explains to Emily that her boyfriend might have to move overseas if the factory that employs his parents shuts down. Emily manages to talk Angela out of the tattoo and saves the factory.

Angela attends Emily's winter party at the Snuggford Hotel. She briefly dates Paul, but soon breaks up with him as he is too clingy for her.

Along with Emily and Francois, Angela tries to save her childhood home from bankrupcy.

Angela makes a few brief appearances. She marries Jimmy, and later lets Emily have one of her puppies.

Angela unknowingly buys Emily's wedding dress to celebrate her one-year anniversary. She comes to Ireland to attend Emily's wedding, bringing with her the dress that Emily picked out.

Angela runs the boutique on Jimmy's cruise ship, which she wasn't happy about at first but eventually came to like it. She is playable in episodes 2, 9 and 13. She learns that Jewel Jacobs, a famous fashion designer, is on the ship and tries to impress her. Jewel gives Angela some fabrics for her to prove her talent. Unfortunately, Kate spills some perfume on the fabrics, and Angela has no choice but to use the fabrics she has laying around. Angela is mortified when Jewel rejects her, so Emily comes up with a plan to help Angela regain her confidence.

Angela and Jimmy move to Jimmy's hometown called Shipsburgh. Angela planned to open a boutique there, but the town isn't what it used to be after the Grimaldi Syndicate took over.

Angela, who is now living in New York, briefly visits Snuggford to catch up with Emily. In the bonus levels, she and Jimmy visit Emily for the holidays.

Again, Angela returns on a family visit. It is implied that she and Jimmy are having relationship problems.

Once again, Angela just appeared again at the Final Level of Emily's Garden 2, along with Kate. The girls were meditating with the Monks.

Angela is starting up her career as a fashion designer. However, she soon finds out that Jimmy is cheating on her with her boss Yum-Mee and gets revenge on them both, breaking up with Jimmy and divorce in the process. At the end of the game, while she is happy that she got her revenge, she is also stressed out because she might be pregnant.

Angela has been selected to join Truly's contest. She started off good, but became rivals with Lori, another contestant who was harboring a secret. Angela decided to leave the contest in Las Vegas and gives the win to Victoria.

Angela doesn't come to Little Creek Hospital to meet Allison Heart, but mentioned in the poster.

Angela doesn't appear in the game, but briefly mentioned.

Angela also appears only in Level 2, where she briefly visits Emily's House to deliver Paige's Dress. It also mentioned in Mary's Toy Shop that Emily & Angela wanted the Teddy Bear since they were Young Girls..

Angela is now working at Victoria's Store, so they are planning for their upcoming High School Reunion in Snuggford High. During the event, She wants to become the homecoming queen. Her Rival, Janet won as the Homecoming Queen, and Both Angela & Janet are fighting for the crown and fell down. Few Minutes Later, They were both prisoned. Angela must create her new Fashion Collection at the Prison and save themselves.

Angela and her big sister Emily are reuniting at the Cruise and meeting the characters of The Love Boat. The sisters are the Co-Stars of the upcoming game.

In Emily's True Love, Angela and Jimmy are married in a chapel in Snuggford. However, in Angela's Fashion Fever, she tells Victoria that they got married in Las Vegas .

Having a new mentor learns to create bridal dresses for all kinds of people . The name of his mentor is Sebastian . And throughout the game she works at his wedding boutiques in several cities . At the end of the game with her friends , Jenny , Virginia and Kitty are organizing their friend's wedding at Fran's cafe and Caroline's logotype.

In this game Angela starts to deal with her own boutique but at first she does not go well because of a very naeghty fashionable creator so she gets her own assistant and starts working for that fashion designer . But at the end she reopens her boutique and participates in a very important fashion show, winning fame and many clients . 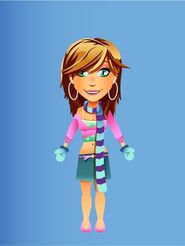 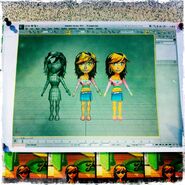 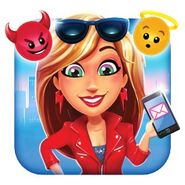 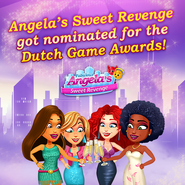 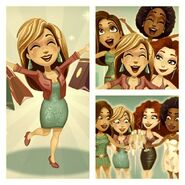 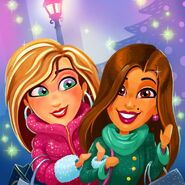 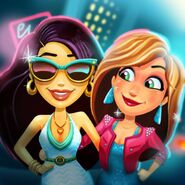 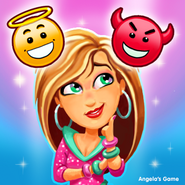 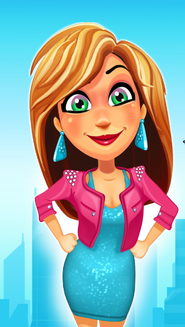 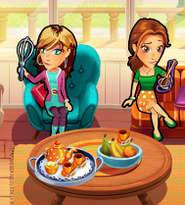 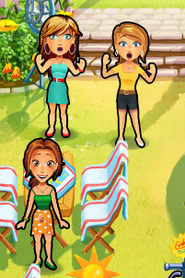 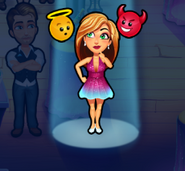 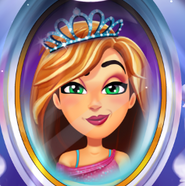 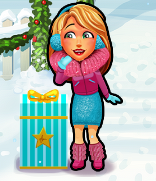 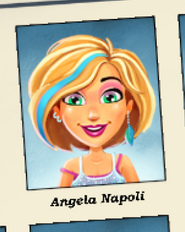 Add a photo to this gallery

Retrieved from "https://emilysdelicious.fandom.com/wiki/Angela_Napoli?oldid=6097"
Community content is available under CC-BY-SA unless otherwise noted.